June 2020, the second month in a row, saw an increase in realization volumes in the market of newly built apartments in Vilnius and Kaunas. In contrast, in Klaipėda the volumes remained at a similar level as in May 2020.

According to Ober-Haus, in June this year, the sales balance (the difference in the number of newly concluded and terminated agreements) for apartments in already completed buildings or projects in progress in Vilnius was 258 apartments or 95% more compared to May 2020. Meanwhile, compared to April this year, the figure in June was 5.3 times higher in the capital city. Looking at the monthly sales indicators for new apartments in April (48 apartments), May (132 apartments) and June (258 apartments), it appears that, following a sharp decrease in activity in April, buyers started to return to the new build sector in Vilnius. 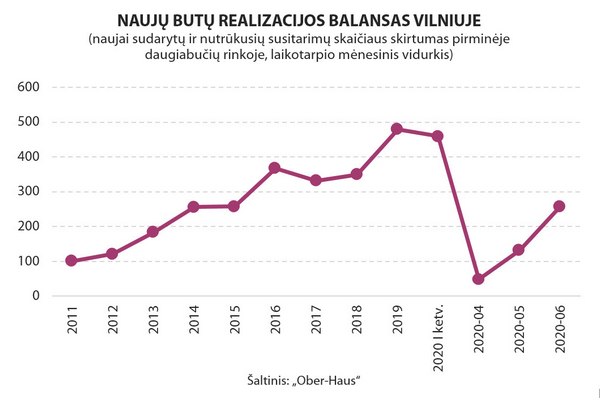 “It is clear that the overall sales indicators of Q2 2020 are extremely modest compared to previous periods. If in Q2 2019, deals for over 1,400 new apartments were concluded in the primary market in Vilnius, so the result this year is down by almost 70%,” Raimondas Reginis, Research Manager for the Baltics at Ober-Haus, said.

In recent months, the same market activity trends can be observed in Kaunas. According to Ober-Haus, in June, the overall sales balance for apartments in Kaunas, calculating sold and reserved apartments in already completed buildings or projects in progress, in the primary apartment market, was 59 apartments or 3.1 times more than in May. Compared to April 2020, 4.5 times more apartments were realized in Kaunas in June. Like it is the case in Vilnius, the overall sales indicators for Q2 2020 are also modest. If in 2019, deals for the purchase of nearly 250 new apartments were concluded in the primary market in Kaunas on average in a quarter, so the result of Q2 this year is down by 63%. 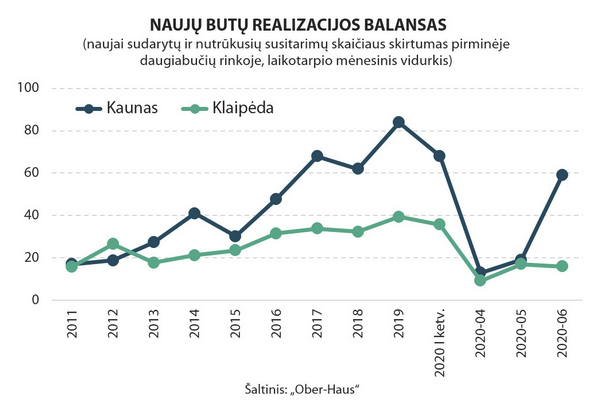 “One of the reasons why there is no faster recovery in the market activity in the city of Klaipėda over the past three months is much smaller construction volumes of apartment buildings than in other major cities,” Reginis pointed out. According to the representative of Ober-Haus, if the construction of apartment buildings in Vilnius and Kaunas has not stopped and developers regularly offer new projects to the market, the developers in Klaipėda are not so optimistic. Suspension of the construction of previously planned projects may lead to a very small number of apartments built in 2021, but the overall realization indicators have already been affected.

“Over the past three months or, we may say during the lockdown period, the developers have essentially not stopped their work and have tried to work normally. Since the overall market activity has decreased significantly, but the construction of apartments or their completion continued, an increase in the number of unsold apartments in already completed apartment buildings was observed in Q2 2020 in all major cities of the country,” Reginis pointed out. 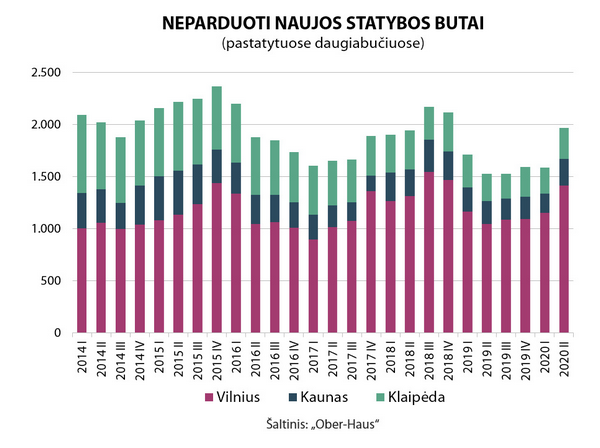 “Of course, the relatively slow demand for newly built apartments in the country’s major cities and the construction of projects at an undiminished pace are likely to lead to a further increase in the number of unsold apartments in the near future. However, as the figures for the past few months show, the confidence of buyers in the sector of newly built apartments is returning. At the same time, a clear message is sent to the market that this was a sudden, but short interruption in this sector. We can now observe how quickly the market will bounce back from the rock bottom of this decade in its activities,” Reginis said.