Over the last three months we have seen some consistent recovery in the new apartment market in the country’s major cities. This is particularly true in the country’s capital that is clearly outstanding in terms of volumes of new construction and the sufficient amount of data which makes it possible to discern the overall trend in the segment. In Kaunas and Klaipėda, mostly due to smaller volumes of new construction compared to those in the capital, we have seen larger fluctuations in the sales market, however, the overall trends are clear – sales volumes are growing, according to the new construction apartment market overview by Ober-Haus.

‘The growing sales of new construction apartments are consistent with the improving expectations of the country’s residents regarding their economic and personal financial standing’, – says Raimondas Reginis, Ober-Haus Research Manager for the Baltics. According to the data of Statistics Lithuania, the consumer confidence indicator has been growing for three successive months, and within that period (16 April–3 July) has increased by 13 percentage points. In the course of July the indicator increased by one percentage point.

According to the Ober-Haus data, the overall sales balance this July in Vilnius multi-apartment houses in the primary market, including apartments already sold or reserved in completed multi-apartment houses (i.e. the difference between the newly concluded and terminated agreements) accounted for 335 apartments, i.e. an increase of 30 per cent compared to June 2019.

The new apartment sales indicators for April (48 apartments), May (132), June (258) and July (335) demonstrate that the recovery in the country’s capital is consistent, i.e. sale volumes grow appreciably every month. ‘Of course, if we compare the sales of new apartments in July of this year with the monthly average of the first quarter of this year, we see that July’s result is nevertheless 27 per cent lower’, – noted Reginis. 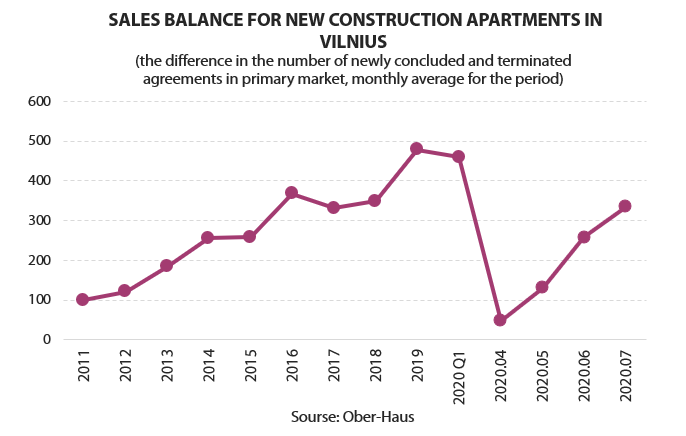 Following the significant and sudden leap in sales volumes this June in Kaunas, figures in July have stabilised. According to the data of Ober-Haus, the overall sales balance this July in the Kaunas market of multi-apartment houses in the primary market, including apartments already sold or reserved in the multi-apartment houses completed, accounted for 56 apartments, i.e. down by 5 per cent when compared to June 2020. In Q1 2020, on average 68 new apartments were sold per month, while this July’s result is 17 per cent lower.

Meanwhile, in Klaipėda, after a relatively poor result for this June, in July the sales volumes of new apartments increased significantly. According to the Ober-Haus data, the overall sales balance this July in the Klaipėda of multi-apartment houses including apartments already sold or reserved in completed multi-apartment houses accounted for 35 apartments, or 1.8 times more than in June 2020. Still if compared with the monthly average of the first quarter of this year the sales of new apartments this July have shown a decline of 9 per cent.’ The most recent data shows that following the specifically poor performance in Q2, there are signs of recovery not only in new construction, but also in the secondary housing market. It is reassuring to see similar tendencies not only in Vilnius, Kaunas or Klaipėda, but also in other regions of the country. According to Reginis, it is quite probable that the official July data will show growing trends in the sales of new apartments throughout the country.

‘The previous buyers of new apartments may encourage the developers of multi-apartment residential houses to commence projects which had been originally planned several months ago in Vilnius and in Kaunas. Not surprisingly, developers will be extremely cautious for now, as they will want to make sure that the current recovery in the housing market is sustainable and that their investments will come to the market at the right time. While developers see a clearly recovering market, at the same time the numbers of new infection cases are growing and there is increasingly frequent talk about a second wave of the pandemic. Developers are therefore, currently facing difficult decisions: whether to take advantage of the improving situation in the housing market and try to gain an advantage in mutual competition by offering a new product to potential buyers, or temporarily refrain from excessive risks and wait until the autumn, when the general situation in Lithuania and the rest of the world becomes clearer’, – says Reginis.