Home / News / Kaunas shines in the market of the most expensive apartment, meanwhile, Klaipėda deteriorates

Kaunas shines in the market of the most expensive apartment, meanwhile, Klaipėda deteriorates In recent years, various Lithuanian regions or cities have been recording significantly different qualitative and quantitative changes in housing supply and demand. “While some cities see a rapid growth in supply and demand for new housing, other cities show marginal changes or none at all. Analysis of the housing markets of the country’s three major cities also illustrates that they are in totally different stages of development. One reliable housing market indicator can be the development of more expensive housing and, definitely, demand for it,” Raimondas Reginis, senior market analyst of Ober-Haus, said.

A survey on expensive housing in Vilnius carried out by Ober-Haus has shown that in recent years the capital of the country has recorded a stable increase in the demand for the most expensive apartments; i.e. every half-year recorded an increasingly higher number of such property transactions as well as increasing amounts of money spent on the acquisition of such assets.

What about the situation in the other biggest cities of Lithuania – Kaunas and Klaipėda – if we compare today, namely, the 2016–2017 period and the situation 10 years ago? To this end, Ober-Haus selected and analysed all transactions on apartments registered in the years 2016 and 2017 (data source: SE Centre of Registers) and compared them to the second half-year of 2007 (when the highest housing prices were recorded in the Lithuanian housing market). All registered apartment transactions where the price of one square metre exceeded EUR 1,800 were selected during the period under consideration in Kaunas and Klaipėda (excluding the price of a car parking places, storage facilities and other apartment appurtenances from the total transaction price).

In terms of the price per one square metre, the most expensive apartments in Kaunas in the first half of 2017 were sold in newly developed projects. An apartment with an area of 68 sqm in the reconstructed and newly built project Gedimino 46 (on Gedimino Street) in the central part of the city, including car spaces, was sold for almost EUR 180,000 (around 2,350 EUR/sqm). Another expensive apartment was also sold in a newly developed project – Piliamiestis (on Brastos Street) – over EUR 343,000 were paid for an apartment of almost 140 sqm with car spaces (around 2,350 EUR/sqm).

These newly implemented residential housing projects in prestigious areas of Kaunas increased the volumes of sales of more expensive apartments in 2017. Out of 39 apartments which were sold over the first half of 2017 and whose price exceeded 1,800 EUR/sqm, 33 apartments belonged to projects completed in the 2016–2017 period (Piliamiestis, Kauno Senamiesčio Apartamentai, Gedimino 46).

Meanwhile, comparing the sales indicators of more expensive housing in Kaunas city in 2016-2017 and 10 years ago – the very peak of real estate purchases and the apex of apartment prices – shows that the 2007 indicators were considerably higher. Over the second half of 2007, 66 apartments were acquired in Kaunas at a cost of EUR 10.2 million or 50% more than was paid for the same assets over the first half-year of this year. In terms of the price per square metre, the most expensive apartments were then sold in a new residential and commercial purpose project –Bokštas (on Kęstučio Street). For instance, an apartment with an area of 67 sqm in this project was sold for EUR 223,000 (over 3,300 EUR/sqm). 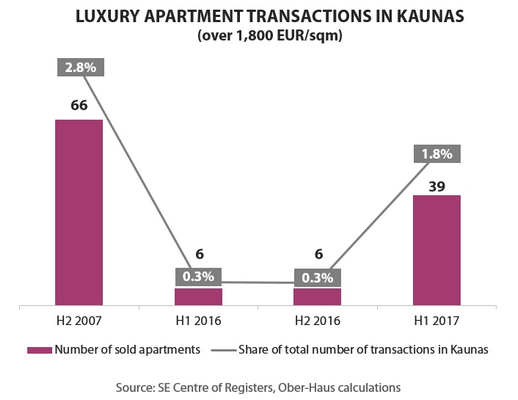 Whereas Kaunas is now seeing trends in luxury housing indicators similar to those in Vilnius (the growth in transactions which was determined by the increase in supply of new more expensive projects), the situation in Klaipėda is totally different. Over the first half of 2016, 7 higher-end apartments (where the price per square metre exceeded EUR 1,800) were sold in Klaipėda (EUR 0.96 million were paid for these apartments including their appurtenances), over the second half of 2016, 13 such apartments were sold (for EUR 1.44 million), and in the first half of 2017, 10 luxury apartments (for EUR 1.72 million) were sold in Klaipėda. 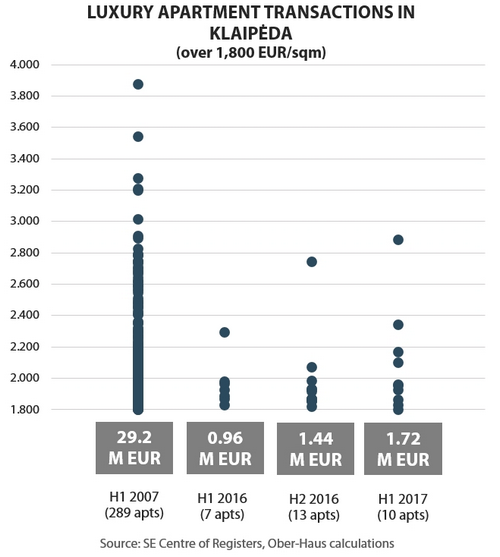 In terms of the price per one square meter, the most expensive apartment during the analysed 2016–2017 period in Klaipėda was sold this year. An apartment with an area of slightly over 200 sqm, in one of the top floors of the multi-functional project K ir D and built in 2006 (on Naujojo Sodo Street), was sold for EUR 585,000 (almost 2,900 EUR/sqm). As there has not been that much construction of new housing in Klaipėda recently, compared to Vilnius and Kaunas, the choice of higher–end projects is consequently also limited (and the number of such transactions is low).

Comparing the situation today with the situation 10 years ago in the main cities of Lithuania shows that the biggest difference is seen in Klaipėda. Over the second half-year of 2007, 289 apartments, whose price exceeded 1,800 EUR/sqm, were purchased in Klaipėda with a total purchase price of EUR 29.2 million. This is 17 times more than over the first half of 2017.

Analysis of the transactions shows that 10 years ago apartments purchased (at prices greater than 1,800 EUR /sqm) were located not only in the most valuable locations of the city or in new construction projects, but purchasers also paid such prices for standard old-construction apartments in residential areas of the city. For instance, out of 289 apartments whose price per square metre in the second half of 2007 exceeded EUR 1,800, a quarter of them were purchased in typical five or nine-storey multi apartment buildings which were constructed between 1968 and 1994 in the southern part of the city. 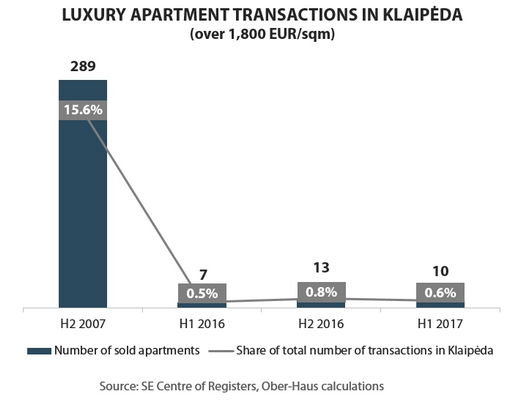 “These transactions fairly accurately illustrate the situation which had developed in Klaipėda ten years ago – prices for standard housing were almost the same as prices in the capital city, and the housing affordability (price-to-income) was the lowest among all major cities of the country. Evidently, the recent downturn was most damaging to the real estate market in the city in which, unlike Vilnius and Kaunas, no sustainable signs of market recovery have been seen, not to mention in the luxury housing sector,” Mr Reginis said.