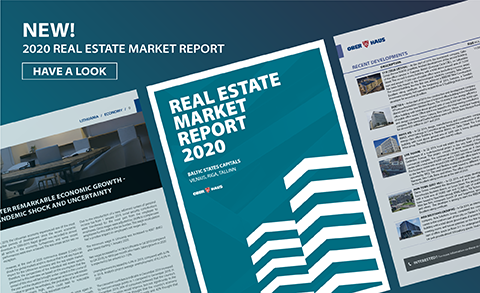 Speaking about 2019, the further impetus for the development of the real estate market in the Baltics was the significant economic growth of all three countries. The rapid increase in personal income, consumption and business development contributed to the development of both the commercial and residential real estate sectors. The situation in the real estate market in 2019 is well illustrated by at least two all-time records in Lithuania: according to Ober-Haus, investment volumes in core commercial property increased by almost 15% totalling €463 million, meanwhile investments in the residential sector reached a record €2.3 billion.

Baltic capitals start 2020 with a large supply of new housing

The capitals of the Baltic countries continue high development activities in the residential and commercial sectors. The development in the multi-apartment segment in Vilnius and Tallinn was exceptional with the highest construction volumes since 2007–2008. Meanwhile, the level of confidence of developers in the prospects of the residential sector in Riga remained much lower. This is also reflected in the figures on construction volumes in 2019 and in the 2020 projections. According to Ober-Haus estimates, in 2019–2020 developers will build about 17 apartments per 1,000 inhabitants in the city of Vilnius, while the figure in Tallinn is 14 apartments and in Riga the figure is half that, at 7 new apartments per 1,000 inhabitants.

According to Reginis, one of the important reasons limiting the confidence of developers in the housing market in Riga is the continuous decline in the number of permanent residents in this largest city of the Baltic countries. If the population in Tallinn and Vilnius has risen in the past five years by 6% and 3% respectively, so the population in Riga has fallen by almost 2%. “It is clear that, among other indicators, the changing number of potential home buyers is essential for developers in assessing further development prospects of the sector in specific regions or cities,” the Ober-Haus expert said.

Most importantly, the capital cities of the Baltic countries started 2020 with a record supply of apartments over the past decade. The capital of Lithuania leads in this area with developers planning to build around 5,200 apartments in multi-apartment buildings in a year. According to Ober-Haus, approximately 3,000 apartments are scheduled for completion in Tallinn and just over 2,500 apartments in Riga in 2020. “Given the current situation caused by the pandemic and the uncertainty in the market, it is highly likely that some developers will adjust or will be forced to postpone their development plans to a later period. It will not be surprising, therefore, if the actual construction volumes this year will be more modest than planned,” Reginis pointed out.

The rate of increase in sales prices in the Baltic capital cities in 2019 was varied. In Riga the prices went up by only 2.3%, in Vilnius – by 6.9% and in Tallinn – by 9.7%. The high level of activity of the housing market in Vilnius and Tallinn at the beginning of 2020 led market players to expect another successful year and an increase of at least 4-6% in the sales prices of apartments.

“However, the consequences of the coronavirus pandemic may have a negative impact on housing prices in the second half of this year and the overall annual price change in the Baltic capitals may be negative. Depending on the duration of the pandemic and its impact on global and national economies, the fall in prices may be either limited to a symbolic decline of a few percent or we may see a double-digit fall in prices,” the representative of Ober-Haus said.

The recovering office space sector in Riga may slow down

The results in Riga are particularly promising as the lack of office supply previously prevented Riga from fully competing with Tallinn or Vilnius for the attention of international companies. According to Ober-Haus, in 2019 the market in Riga was supplemented with nearly 56,000 sqm of new office space (66,000 sqm in Vilnius and 20,000 sqm in Tallinn). In 2020–2021, more than 70,000 sqm of office space should be completed in the capital of Latvia, which would provide a solid basis for the city in its claim for potential tenants of foreign capital. It will therefore be very interesting to see how both domestic and foreign capital companies respond to the abundant new office space supply in Riga. 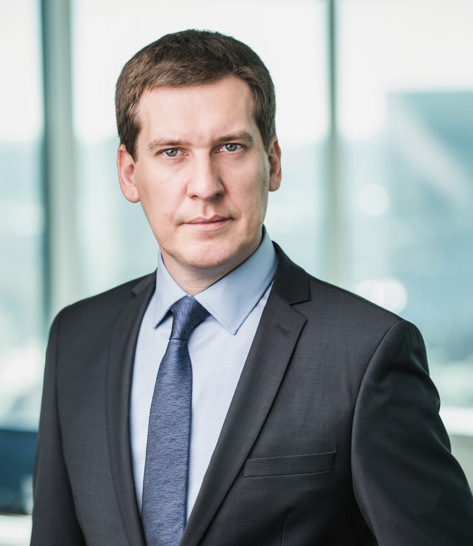 However, at the beginning of 2020, Riga faced two challenges: a significant sudden surge in supply and a coronavirus pandemic threatening the whole economy of the country. In 2019, the increase in the modern office space in Riga increased the office vacancy rate from 4.5% to 8.5% in a year. “A similar situation was recorded in Kaunas (Lithuania) in 2019, where a significant increase in the new office space increased the vacancy rate to double digits. In these cities it takes more time for the market to fully absorb the large supply than it does, for instance, in Vilnius or Tallinn,” Reginis pointed out.

Meanwhile, the vacancy rate in Tallinn and Vilnius did not change significantly in 2019 and at the end of the year stood at 3% in Vilnius and 4% in Tallinn. Encouraged by high absorption rates at business centres in Vilnius, developers are very enthusiastic in this city and plan to offer at least 170,000 sqm of office space to the market in 2020–2021 (in projects that are currently being completed and in progress).

According to the Ober-Haus expert, these development plans would be justified in a growing economic environment and would not be surprising, but the situation at the beginning of 2020 looks less optimistic. “Under the conditions of an increasingly fast-growing supply, further slowing down or even shrinking business development could significantly increase the modern office space vacancy rates in Vilnius, particularly since the current vacancy rate is the lowest in the past 12 years” Reginis said. Even if all business centres that opened in Vilnius in 2019 were fully leased, it would be much more difficult to expect the same situation in 2020 or 2021. Although some of the recently launched projects may yet be suspended or their construction may be postponed to a later period (not only because of the uncertainty in the real estate market, but also because of external financing), most of the projects currently under construction are already well under way and it seems that the developers will endeavour to complete them.

However, the overall vacancy rate may increase not only due to the new supply of office space, but also due to the migration of tenants, who will move to newly opened buildings leaving a significant amount of vacant premises in older buildings. “Therefore, if the forecasts of the country’s economic decline are confirmed and if we see the overall increase in vacancy rates of office space in the market in the near future, the situation may be very different for specific projects. While some property owners enjoy full occupancy with recession-resilient tenants, others may have to face, at least temporarily, high vacancy rates and a significant reduction in income,” Reginis said.