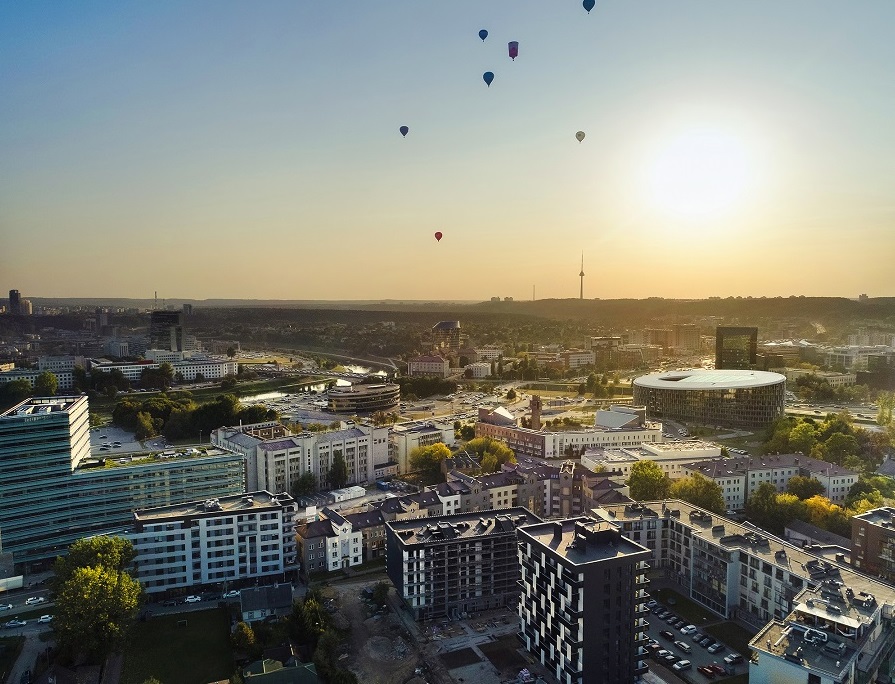 Looking back at 2018 it can be said that the housing market of Lithuania is going through its second golden age. The level of housing market activity and financial indicators shot up and it looks like they are to going to surpass their all-time high.

According to the State Enterprise Center of Registers, nearly EUR 2.05 billion was spent on buying residential property (apartments and houses) in Lithuania in 2018 or 9.2% more than in 2017. Looking at historical data, an even larger amount of money for buying homes in Lithuania was spent only in 2007 and totaled EUR 2.22 billion. In 2018, the increase in the amount of money in the housing market was observed essentially in the entire country, i.e. compared with 2017, growth was recorded in as many as 44 out of 60 municipalities in Lithuania. If in some municipalities positive change was only symbolic, in other municipalities the amounts spent on buying homes increased by a third. 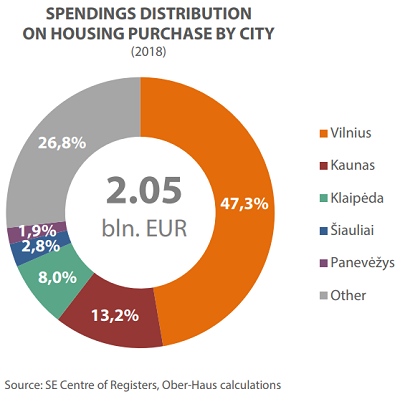 Vilnius and Kaunas city municipalities particularly stood out in 2018. In the country’s capital city over EUR 970 million was spent on buying homes, which is all-time high, or 9% more than in 2017 and 2% more than in record 2007. The most rapid growth in Vilnius was recorded in the house segment, which over the past 5 years has seen new annual all-time records in the level of activity, volume of construction or spending. In the meantime, the biggest change among major cities in 2018 was recorded in Kaunas, where over EUR 271 million was spent on buying homes, almost 16% more than in 2017. In 2018, over 4% growth (nearly EUR 164 million) was recorded in Klaipėda, 4% (over EUR 57 million) in Šiauliai, and over 6% (nearly EUR 40 million) in Panevėžys for purchasing homes compared to 2017. 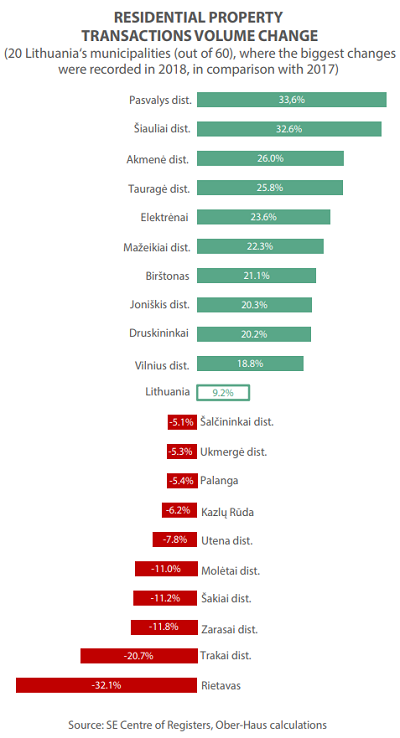 Positive economic outlook of the country and continuing high activity in the housing market promoted further growth of sales prices in the major cities in 2018. “The fastest relative price change, however, was recorded in smaller cities, where the level of prices is much lower and there is room for faster percentage growth of sales prices,” said Raimondas Reginis, Ober-Haus Research Manager for the Baltics.

According to Ober-Haus, in 2018 in Panevėžys and Šiauliai an increase of 11.6% and 8.9% respectively was recorded in prices of apartments. In Kaunas, Klaipėda and Vilnius the apartment prices increased by 4.2%, 3.7% and 3.0% respectively. The fastest increase in the prices of houses in 2018 was recorded in the cities of Klaipėda and Šiauliai and their environs, totaling 6% on average. The prices of houses in Panevėžys and its environs increased by 4% on average, and in Vilnius and Kaunas by a mere 1% in 2018.

“This shows that the activity in the apartment rental market continues to remain high. Even in the country’s capital where more and more apartments are built every year and a large portion of them is purchased for both short-term and long-term lease, the market is able to absorb apartments for rental offered to the market. The growing number of citizens and their income and also limited possibilities of some people to buy their own home supported the rental sector activity,” said Mr Reginis.

In 2018, Vilnius, Kaunas and Klaipėda saw particularly huge volumes of construction of multi-apartment buildings. According to Ober-Haus, in Vilnius developers built 4,355 new apartments or 5% more than in 2017. Although the volumes of apartment construction haven’t reached the 2006–2008 level (during that period 4,800–5,800 apartments were built annually), in terms of the diversity of new projects in Vilnius the year 2018 was truly exceptional. 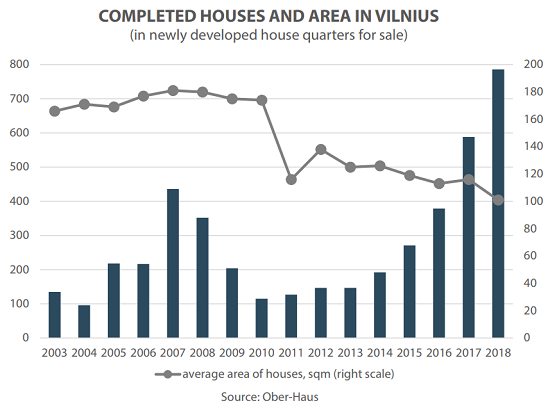 The construction of apartments in multi-apartment buildings in Vilnius has not yet reached record levels, but the construction of detached and semi-detached houses reached all-time record. In 2018, developers built nearly 790 new houses in the city of Vilnius and its environs or an impressive 34% more than in 2017 and more than twice as many as in 2016. The supply of houses for sale in 2018 was the highest annual supply indicator throughout the entire real estate market history in Lithuania. With the increasing competition in the segment of multi-apartment buildings, some developers and individual investors in recent years decided to offer an affordable housing option to customers. Currently, row houses with small floor area dominate in the house development market. Despite that over the last decade, the floor area of houses for sale decreased by an average of 30% (2000–2010 compared to 2011–2018), a detached or semi-detached house remains perhaps the only alternative for those looking for a larger newly built home. Although in 2018, the average floor area of houses for sale offered by developers was record small – 101 sqm, it is still twice as large as the floor area of an average apartment in newly constructed buildings (the average floor area of apartments in newly constructed multi-apartment buildings in 2018 was 50.2 sqm).

In 2018, Kaunas also entered a rapid housing development phase. According to Ober-Haus, a total of 997 apartments were built in a year in this city or 57% more than in 2017 and three times as many as in 2016. More apartments were built in Kaunas only in 2008, when developers completed 1,070 apartments for sale in multi-apartment buildings. The year 2018 was marked not only by abundance of newly constructed apartments, but also by a wide choice of projects – customers could choose from 24 different projects. It is obvious that developers of both the residential and commercial projects started to trust the prospects of the city of Kaunas and decided to exploit the growth potential of this city.

After a longer break, Klaipėda could also boast of greater apartment development volumes in 2018. A total of 11 projects offering 429 apartments were implemented in Klaipėda in 2018. This is 2.3 times as many as in 2017. In 2011–2017, only about 200 new apartments per year were built in Klaipėda on average.

Fewer purchases of new housing in Kaunas and Klaipėda in 2018

In the primary market of apartment buildings in Vilnius increasing sales volumes were recorded in 2018 not only because of active buyers, but also because of further increase in the construction volumes of apartments, i.e. choice options. According to Ober-Haus, 4,188 new apartments were sold and reserved in the capital city in 2018 or almost 6% more compared with 2017.

“In the meantime, in Kaunas and Klaipėda decreasing sales volumes were recorded in the primary market of apartments. Unlike in Vilnius, a decrease in the construction volumes of multi-apartment buildings by a quarter is forecast in 2019 in these cities, which could have affected sales in 2018 (particularly pre-sales in the projects under construction),” said Mr Reginis. In 2018, 735 new apartments were purchased directly from developers in Kaunas (10% less than in 2017) and 373 apartments in Klaipėda (8% less than in 2017). 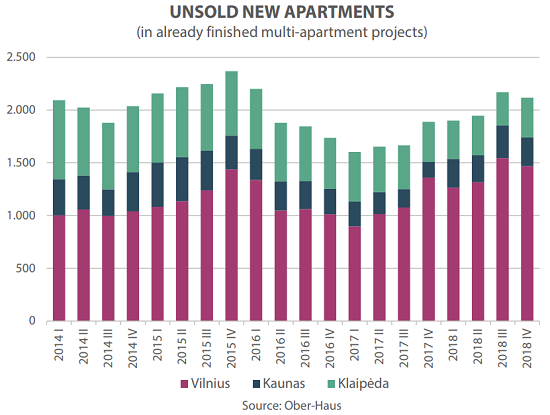 Housing is most affordable for residents of Šiauliai and Panevėžys

The ratio between the prices of apartments and wages in 2018 continued to improve for the benefit of buyers in almost all cities of the country. According to Statistics Lithuania, the net wages in the municipalities of the cities of Vilnius, Kaunas, Klaipėda, Šiauliai and Panevėžys in 2018 increased by 7.2–9.8% on average compared with 2017. According to Ober-Haus, the average prices of apartments over the same period increased in these cities by 2.6–8.0% (the 2018 average compared with the 2017 average). 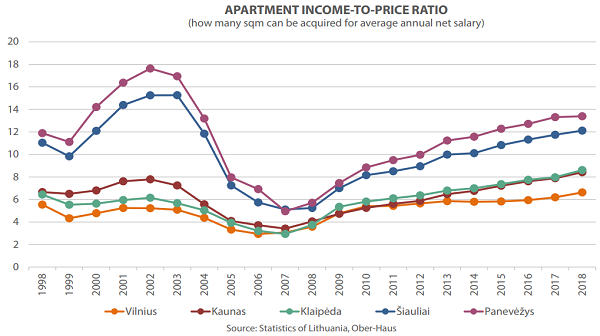 “Looking at these indicators, statistically the least affordable housing is in the cities of highest economic activity where the prices of homes are noticeably higher than those in smaller cities. And the gap is really considerable. Statistically, a resident of Šiauliai and Panevėžys is able to purchase twice as much floor area of a medium class apartment on average than a resident of Vilnius,” said Mr Reginis.