For the Lithuanian commercial real estate investment sector, the sluggish first half of 2019 was more than offset by the second half of the year. According to Ober-Haus, acquisitions of the modern commercial property (office, retail and industrial buildings/premises with a value of at least EUR 1.5 million) amounted to EUR 463 million in Lithuania in 2019. Property sales in 2019 yielded 15% more than in 2018 and it is the best result for any year on record. 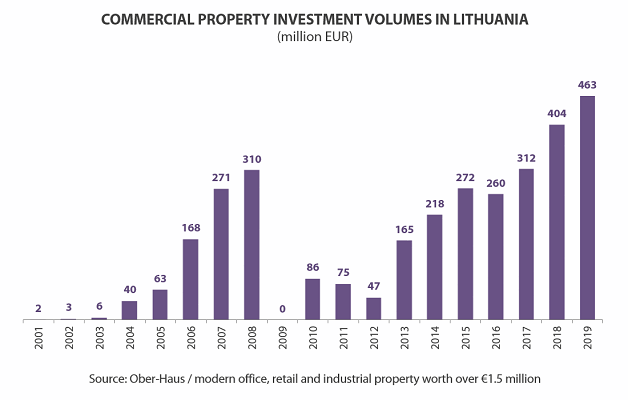 “The impressive results of 2019 are essentially due to the two biggest investment deals ever in the office sector,” Raimondas Reginis, Research Manager for the Baltics at Ober-Haus, said. At the end of 2019, the Quadrum business centre deal was finalised: one of the companies of the German Deka Group bought a complex with an area of about 70,000 sqm (including the underground area) in Vilnius from Schage Real Estate, the Norwegian real estate development company, for EUR 156 million.

The second substantial deal was the acquisition of three office buildings, S7 in Vilnius. At the beginning of 2019, it was announced that Eastnine, a Swedish investment company, had agreed to acquire these buildings from their developers M.M.M. projektai. It is reported that the total value of the deal concerning the three buildings in Saltoniškių Street is just over EUR 128 million. In 2019, the ownership of the two buildings was transferred to Eastnine, and they now house Danske Bank Global Services Lithuania and Telia Lietuva. Finalisation of the acquisition of the third building (tenant – Danske Bank) is expected at the beginning of 2020. The acquisition of Quadrum business centre and the two S7 office buildings alone accounted for more than 50% of all investment in commercial real estate market in Lithuania in 2019.

The third largest investment deal of 2019 was the acquisition of two properties in Kaunas. One of the funds of EfTEN Capital, the Estonian commercial real estate fund manager, purchased the River Mall shopping centre and River Hall business centre from SIRIN Development, a real estate development company. The total area of the two buildings located on Jonavos Street is approximately 20,000 sqm and although details of the deal have not been disclosed, it is expected that the total value of the deal was more than EUR 30 million.

The acquisition of the Duetto office building in Vilnius, two Depo shopping centres in Vilnius and Kaunas and the North Star business centre in Vilnius also contributed significantly to the total value of investment deals in 2019. It is thought that the value of each of these property acquisitions might have been between EUR 18-25 million. Other deals included office, retail and industrial objects in various Lithuanian cities (Vilnius, Kaunas, Klaipėda, Panevėžys, Šilutė, Radviliškis, Ukmergė, Molėtai, Kėdainiai), however with values of less than EUR 12 million per object.

“As far as smaller deals are concerned, the smaller-sized retail property segment was prominent in 2019. Buildings of between 2,000 and 4,000 sqm were popular among investors, where supermarket chains are already operating,” says Raimondas Reginis. One of the most active buyers in 2019 was Baltic Sea Properties, the Norwegian real estate company, which now manages about 40 retail and other commercial properties in Lithuania.

According to Ober-Haus, of EUR 463 million invested in Lithuania in 2019, the Lithuanian capital scooped an impressive 79% (Vilnius’s share was 70% back in 2018). Investment distribution by segments of real estate was largely decided by the two major deals in the office sector already mentioned and very stagnant investment in industrial sector. Hence, office sector saw the largest investment (71%) in 2019. Retail sector took a 27% share of investment and industrial a modest 2%.

As for the geography of investors, German investors spent the most in 2019, with Deka Group being the main contributor, and accounted for 35% of investment in Lithuania. Nordic and Baltic investors (Sweden, Denmark, Norway, and Estonia) were active as usual, making up 41% of all investment. According to Ober-Haus, the final 24% was shared by investors from Lithuania, France, and Russia.

“Looking at 2019, it is evident that the growth of the investment market should not be attributed only to investors being eager to invest in the active real estate market of Lithuania, but also to the rapidly increasing number of higher quality properties in the market. Larger real estate funds have eyes for new modern business and shopping centres with strong tenants,” Mr. Reginis noted.  For example, the effect of the new supply has clearly manifested itself in Kaunas since 2017-2018, when investors started acquiring newly built business centres in the city. Such activity in the office sector of Kaunas was basically previously unheard of. Active development of warehousing and industrial objects in the regions of Vilnius, Kaunas, or Klaipėda could also add to greater investor interest in this segment, which did not receive proper attention in 2019.